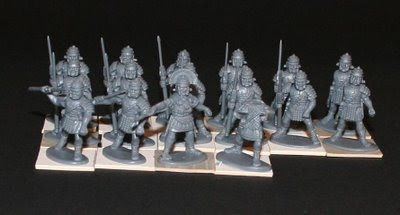 After much humming and hawing I bought a box of the Warlord Games plastic 28mm Romans. Like many people I got a free one with miniature Wargames and was subsequently disappointed by the small size of the figure. This was especially so as my current EIR army is made up of the big Steve Saleh sculpted Foundry figures. Warlord have won me over by just turning out a huge number of figures in their first year which include all sorts of interesting figures such as marching figures, carts, mules etc. This means that I can really build the sort of force I want, which the lack of variety in the Foundry figures didn't allow me to do. Warlord are also promising interesting opponents like Dacians and Samartians too. Finally, the Warlord figures match the older Perry Foundry ones quite well so characters and such can come from the Foundry line.

I have now made a few of the figures from my first box and so I will start to do some over the next few months.

Because of this project I have decided to expand the coverage of this blog to all Romans from 1st Century AD until 4th Century AD. Several armies, I know. but it means I will update it a bit more often hopefully.
Posted by legatus hedlius at 14:46