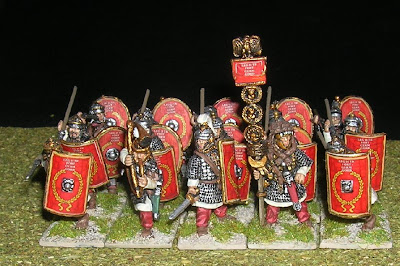 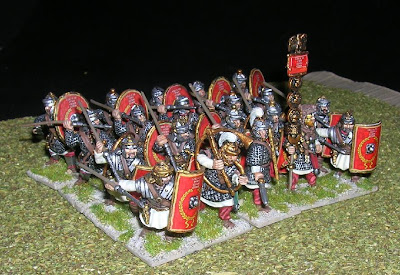 This is the first Roman infantry unit I painted. Historically, there are all sorts of things wrong with it. The first two ranks have lorica segmenta whilst the back two ranks have chainmail. The front two ranks also have square shields rather than oval ones. 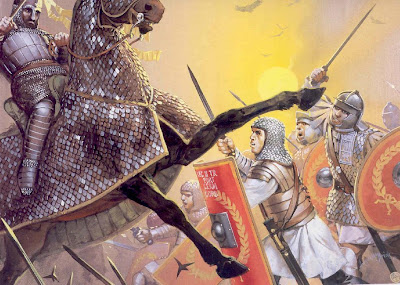 This mirrors a picture in the Osprey where Angus Mcbride shows his front rank with lorica, rectangular shields, armored sleves and a chainmail hood. A&A actually make these figures (the scale armoured ones too) so I will have to order some and then move my existing front rankers into another unit. Although there is reasonable archaelogical evidence for all these items mixing them in with scale armoured troops with oval shields is dubious. However, it looks really cool and franlky who knows what was worn nearly 2000 years ago. No one at Guildford is going to object, I suspect.
The figures in lorica, with rectangular shields and late Gallic helmets are probably really from an earlier era, say the late second century. It's likely that Marcus Aurelius' troops who fought in Germania (as depicted at the beginning of Gladiator) looked more like this.

One thing that there is evidence for is the colour of the tunics as a painting of Roman troops was actually discovered at Dura Europas in Syria in the 1920's. They clearly demonstrate a white (or more likely, off white) tunic. Amazingly given this visual evidence there are still people who won't credit it. As far as I am concerned this is more visual evidence than we usually have about uniforms of ancient times. The characteristic mustard coloured cloaks are much in evidence too. Note too the pink bands on the standard bearer's tunic.
Points wise this is difficult to judge as they are really too late for the EIR list (although it does say in the main rule book that the list is good until 250AD) and too early for the Fall of the West list which goes from the 4th Century. The general consensus on TMP seems to treat them as EIR but with more cavalry. Certainly the WAB EIR list gives statistics for Lanciarii, which were from our period.
Looking at 16 points per legionary plus 5 points for the leader you are looking at 325 points for this unit.
Posted by legatus hedlius at 12:15