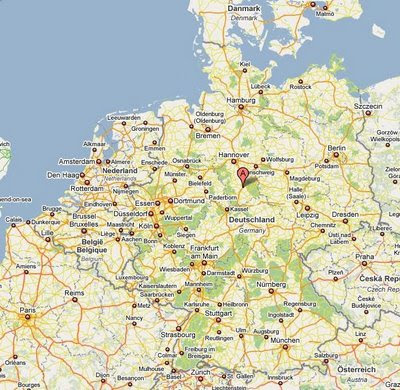 A marks the spot.
The site of a battle between Roman troops and Germans has been discovered in Kalefield, south of Hannover. http://www.spiegel.de/international/germany/0,1518,596720,00.html It is very rare to discover an unknown ancient battlefield like this and this one is particularly interesting because of how far north it is and how undisturbed.

Some of the finds
After the defeat by Varus in the Teutoberg Forest in AD 9 (when is anyone going to make suitable Romans, with the early lorica segmenta, for this in 28mm?) it was generally believed that the Romans kept well away from Germany apart from the occasional raid. However, if this was a raid they were deep into German territory and coming south, according to the archaeologists. 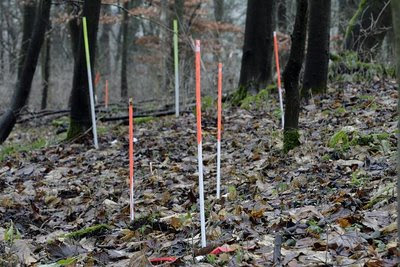 Markers indicating some of the over 600 finds so far

The archaeologists reckon from the missiles that they have found that about 1,000 Romans attacked a German force on top of a hill. From the boot studs, arrows and ballista bolts it looks like a mixed force of auxiliaries, archers and ballistae. Carbon dating of wood found in an arrow head points to 200-250AD. This ties in with a known declaration of war on the Germans by Emperor Maximinus Thrax (i.e. Maximinus the Thracian c. 173–238). 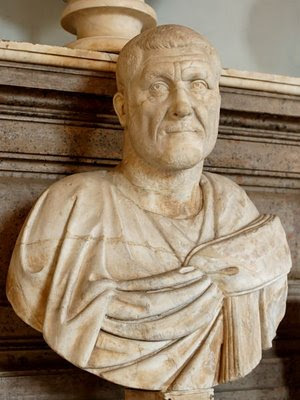 Thrax was a big (possibly even a giant- there is a theory that he had acromegaly), uncultured , low-born Thracian who became Emperor (much to the Senate's horror) when his predecessor, Alexander Severus, was killed by the Praetorian Guard partly because of his appeasement to the Germans. Maximinus probably had little option, therefore, but to declare war on the Germans. The Senate later withdrew support for him and he was in turn killed by the Praetorians in April 238AD during his unsuccesful campaign to march on Rome.

This has wargames scenario written all over it and would make a great game with my third century Romans, especially as their are suggestions that there were many eastern Archers involved in Thrax's German operations like the ones I have already painted.

For troops I would use the A&A figures. As they are likely to be auxiliaries then probably chainmail equipped with oval shields, archers and a ballista or two. One of the finds was a "hippo shoe" a sort of overshoe for a horse or draft animal so there could have been cavalry or maybe only equipment mules or carts (for the ballistae?). Perhaps three units of infantry, one of archers and two balistae again (about 100 figures) against a bigger force of Germans on a hill.

Were the Germans encamped on the hill or just fighting on high ground? Was it a settlement? We may know more after the archaeologists get back to work on the site at Hazhorn Hill this March.
Posted by legatus hedlius at 03:36