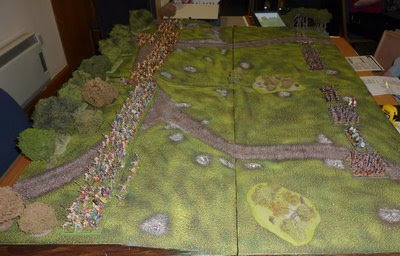 I actually got along to Guildford yesterday for a WAB game and took my little boy with me as he is much better at dice throwing than me. Andy and I had 2,000 points of Ancient Britons against Dave and Keith's 2000 points of Early Imperial Romans. 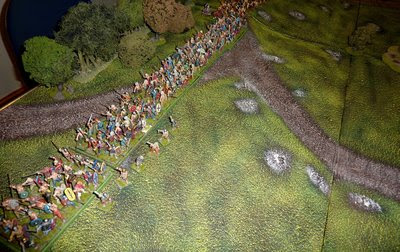 My Warband. Only a few Germans in there to make up the numbers!


As usual it was very tricky to fight against Romans with their double rank strikes, large shields and drilled and stubborn characteristics. One thing I remember from the battle we did at Fishbourne Pa couple of years ago was that slingers can be very effective at whittling down numbers so the Romans, who have small units, lose rank bonus. We had about 3 dozen slingers and whilst my small unit was wiped out early by a particularly annoying unit of Roman cavalry Andy's did sterling service.

One thing I had forgotten was how devastating Roman scorpions can be. I must make sure I field some when using a Roman army and also have some way of neutralising them if facing them. 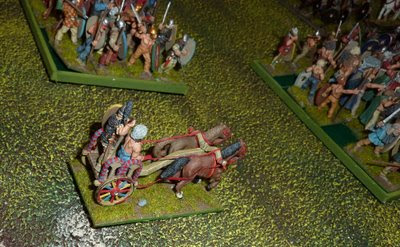 In the end it was quite close with the Britons winning a marginal victory (according to the Romans but then they would say that wouldn't they?). On my side I was lucky to have Guy throw some critical high dice throws when needed! 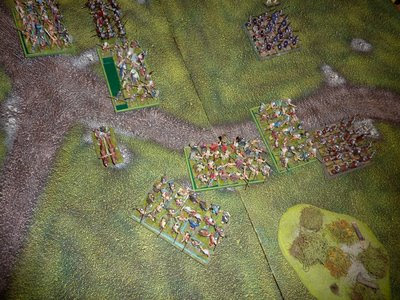 John produced another great scenic piece for the game and it really does enhance a battle to have such nice scenery to fight over.

Now I have to see if I should get on and finish either my Celts or Ancient Germans so that I have an army to field against Keith's Romans in a 1 to 1 fight. 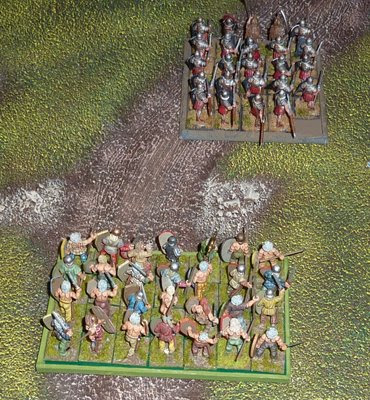