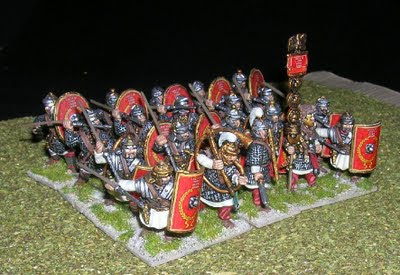 I love Dr Phil Hendry's website; his Romans are always an inspiration and he has almost (but not quite!) convinced me of the merits of army painter (or the "dip" as the non proprietal method is called). Now, due to some technical issue that I couldn't make out (it's the sort of things Mac users always have-serves them right for wanting to be different) he has started a new one: http://web.me.com/philhendry/Phil_Wargaming_Website/
On his new site he has some pictures of his newly painted A&A 3rd Century Romans and Sassanid Persians which are, as ever, wonderful. However what really got me thinking was his proposed 1000 point armies for each faction as they come to ..well, not very many figures at all. Now, I don't plan my armies at all. I just paint bits of units and then put them away for two years and later maybe finish a unit, put it away etc. -part of the problem of not being able to concentrate on one period. But these sorts of numbers look acheivable.
So far I have finished two units for my 3rd Century Roman Eastern army:
1x20 unit of legionaries 325 points
1x16 unit of armoured archers 149 points
So, I've already got 474 points painted. A general will give me another big wodge of points and I have a few cavalry on the go to. I have another unit of legionaries based and ready for undercoating and, now I that have at last started to use spray undercoat, these could be on the go quite soon. So maybe now is the time to plan this army and see what I can do for it.
Thanks Dr Phil!
Posted by legatus hedlius at 01:46

Great looking Romans - thanks for sharing them!