A new home for some of my Romans...

Skulking in the vineyard


I've never sold any of my painted figures before but when I saw BigRedBat asking if anyone had any of the big Steve Saleh sculpted Foundry Romans for a game he was planning at Partizan I volunteered to sell him mine.  I was delighted to see a picture of my auxiliaries on his blog post of the superb looking battle of Ad Castores at last weekend's event in Newark (where on earth is Newark anyway?).  Even better he had hidden them in a vineyard and named the cohort after me.  I really do feel that the figures have gone to a good home!  He has just put up a post about them here and they now look fantastic.  Many of these figures had to be painted very quickly overnight as the game they were painted for at Fishbourne Roman Place was not going well for the Romans and we needed reinforcements. 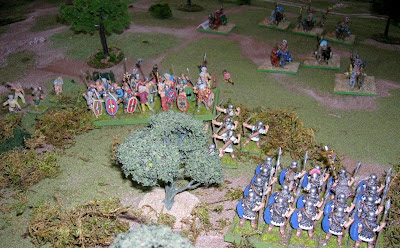 Now given that I said once that if I had to give up all other wargaming periods except one it would be Early Imperial Romans it may seem odd that I sold all my EIR figures. The thing is that while I liked Saleh's Roman there were hardly any different poses as he never finished the range; the consequence of the implosion at Wargames Foundry a few years ago.  In the meantime, we have seen the launch of Warlord Games and their extensive Roman range.  I made the decision to move over to their figures as soon as I saw their "tortoise".  I own about four boxes of their plastics and have constructed and based up a unit but haven't' started painting them.  They have been sat precariously perched on an old tray on top of a pile of file boxes of old Penthouse magazines from the sixties and seventies in the corner of my study for well over a year. 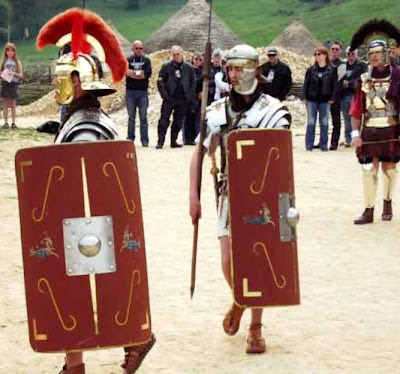 
I find Romans quite quick to paint so why haven't I started them?  The answer is lack of shield transfers.  I want to do the Roman invasion of Britain in AD 43 which means the II, IV, XIV and XX Legions. However, there is reasonable evidence to suggest that Legio II Augusta, commanded by Vespasian, featured a Capricorn design on its shield (the Arch at Orange being a source for this as it was partly built in honour of the successes of Legio II Augusta in the Gallic Wars).  Yet nowhere can I find a shield transfer for this famous unit. I really don't want to have to paint every shield but it looks as If I might have to!  The Legio Secunda Augusta re-enactment group have come up with their own version of the shield design and it wouldn't be that hard to paint; just time consuming! 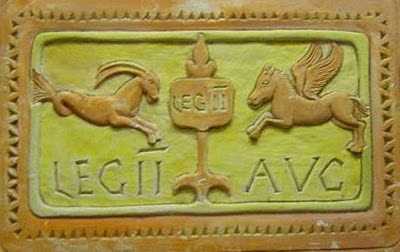 While scanning some older posts on my Punic Wars blog I saw all the posts I did while preparing a force for the Society of Ancients Cynoscephalae game a few (five!) years ago.  In fact it was attending that event where I met BigRedBat for the first (and only) time.  Given I have just finished painting a unit of figures (a rare occurrence) I was wondering about digging out the next unit of Carthaginian veterans that I have somewhere.  I think they might even be undercoated!  Maybe then I might expand my Roman legions from the current 1:100 figure ratio to 1:50.  I used 12 figure units as that was what the WAB Hannibal supplement suggested but 24 man units would look better and would be better for Hail Caesar and some of the other new ancients rules I have bought recently.

So maybe it's time to return to Rome!

Posted by legatus hedlius at 01:28

Hi Legatus, just came across this post and have linked to this blog of yours, which I'd missed until now. Thanks again for the minis!

Might be worth you contacting Steve at LBMS to see if he could make a transfer up?

If you decide to get the Warlords painted, I could flog you some Imago Militis miniatures at a nice price, that would be a great match for them. Some are even painted...