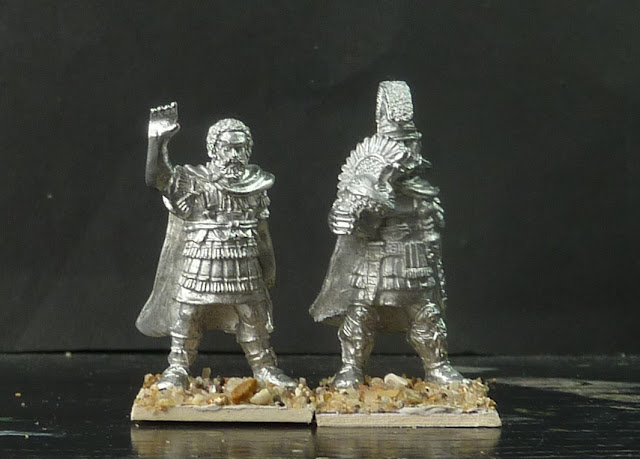 Marcus Aurelius prepares to lead his army into Germania!  Little does he know that he will be murdered by Johnny Cash!


Just over a year ago when I was playing favourites I opined that if I had to paint only one wargames army it would be Early Imperial Roman.  And yet, not long ago, I sold nearly all the figures I had to BigRedBat, whose Greek and Roman armies are simply awesome.

How could Romans be my favorite wargames army if I didn't have any of the classic EIR figures any more?  I looked at the plastic Warlord Games figures again but they are not very inspiring, I have decided, despite lots of supporting figures (all in different scales and styles).  I loved my Steve Saleh figures but there just wasn't enough variety for me to happily build an army: no command, no cavalry or artillery and only a few poses.

But the problem was that for the period I wanted to do (invasion of Britain in 43 AD) there were no other EIR figures I liked.  I looked at the Warlord plastics again but still didn't feel inspired, partly because there were no Little Big Men decals for the Legio II Augusta who I really wanted to paint. 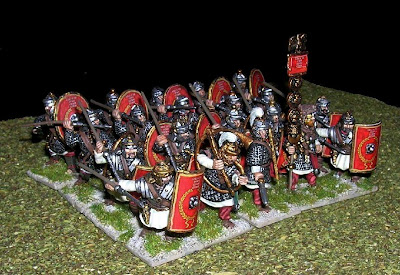 
I really want to paint some Romans, though. I haven't painted any since October 2007!  Recently I have had an epiphany, however.  I was looking at the wrong period!  Now, I already have a Republican army which I finished in 2007, although recently I picked up some figures on eBay so I could push it from 12 man to 24 man units.  I have quite a few Foundry Caesarian Romans of which I have only painted one centurion.  I am wondering about the new Warlord plastics as they are supposedly bigger than their EIR figures.  I have painted two units of A&A's lovely 3rd Century Romans which I intend to pit (eventually) against Palmyrans.  I even have some late Romans from Black Tree Designs (they are much nicer than their EIR figures which have very short legs) which I am now thinking of matching up against some of Musketeer's excellent Goths.

A couple of years ago when I was bemoaning the lack of good, modern 28mm EIR figures an anonymous person commented on one of my posts as follows:  "You would be suprised. Wait some months ;-) There would be saleh style legionaries in Dacian war armour, new gladius poses, legion command, artillery etc, all in 28mm scale."   I had no idea who left this comment but now wonder whether it could be someone from Aventine Miniatures.  I knew that they were doing Etruscans but had missed the fact that they had started an EIC range or, strictly, a late EIC range because these figures are supposed to cover the period from 100AD to 190AD.  Too late for my invasion of Britain but they would work for wars against the Dacians, Sarmartians and Germans.  I looked at their website and was surprised to see how many packs they had already.  This is when I had my epiphany!  What had started me buying (initially) Peter Pig 15mm EIR figures was seeing the film Gladiator.  I also bought some Germans.  I even painted a lot of them.  Then I started to buy and paint some of Foundry's Mark Copplestone Ancient Germans.  I actually have about 70 figures painted which is a huge amount for me.  Why not go back to my original Gladiator inspiration and have an Aurelian army to take on the Germans?  The Aventine figures are just the right period (although I wish some of the figures had beards which, it seems, was common during the reign of Marcus Aurelius). 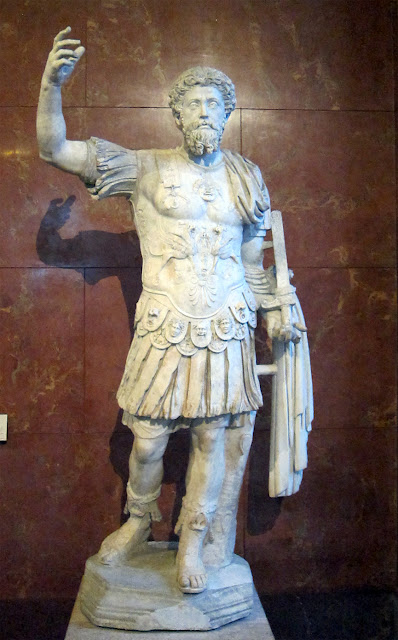 Then BigRedBat announced he was looking for unpainted Foundry Germans and we realised that maybe we were planning a similar (identical?) project at the same time.  Normally this would put me off because he is so focussed and will no doubt churn out huge numbers of (lovely) figures in a very short time.  In the meantime I had ordered some sample packs from Aventine and when they arrived they were just beautiful. Large, like the Foundry Saleh figures, and very similar in look but this time there was enough variation.  No cavalry yet but this does still seem to be an ongoing project.

Today I have based Marcus Aurelius and a supporting primus pilus and have sixteen Praetorians to get started on.  This time I am going to do what one of the WAB books suggested; start with your commanding officer and what better way to start a  new Roman army than with the Emperor!

Posted by legatus hedlius at 12:41

A new venture! Splendid. I love their EIRs and have the start of an army, here, myself. I've started reading into the Marcomannic wars, which are little known to gamers.

I've been painting Greeks ever day until first June, but soon after that I want to use your Romans, together with some more I bought painted on Fleabay, to carve out a new legion... have been missing my Romans. And then there are those Germans...