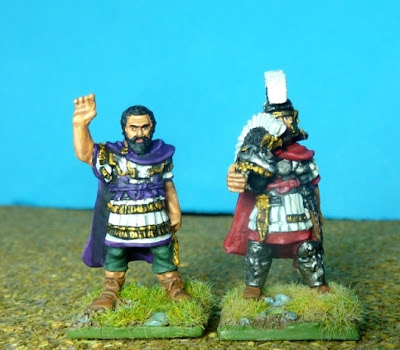 I've just finished my first Aventine figures of Marcus  Aurelius and a Praetorian centurion.  Aventine give the centurion a choice of heads, including one with the more usual transverse crest but I want all my Praetorians  with these crested helmets.  Aventine do a really good range of command figures for this period and I have just ordered the Praetorian command set and some more Praetorians for my first unit. I've also ordered some of the new archers which should keep me busy for a while.  These are really nice figures to paint but they are so big and heavy that I keep dropping them as they weigh more than I expect when I pick them up!

Marcus Aurelius is, inconveniently, one of the few Roman emperors from the first 200 years AD about whom we know nothing of his hair colour.  Most of the other emperors have their hair colour mentioned somewhere.  I have given him black hair on the basis that his family originally came from Spain.  He was notably ascetic so I doubt whether he would have worn such an ostentatious purple cloak but he is the Emperor and probably needed to stand out on the battle field at least.

A philosopher more than a warrior he was, nevertheless, fated to spend much of his reign campaigning against the Germans and is, of course, the emperor played by Richard Harris in Gladiator and by Alec Guinness in The Fall of the Roman Empire; both of which I need to re-watch to keep my interest going!

I originally had the centurion in a white tunic for which there is a fair bit of evidence for Praetorians but went for red in the end because he needed a bit more colour.  Red cloaks were quite likely for officers in the Roman army.

I'm not a great one for those mini diorama type command stands as I like my figures individually based but I will try to build a retinue for the Emperor.  Aventine make some nice Praetorians in cloaks so I may give him a few of those. 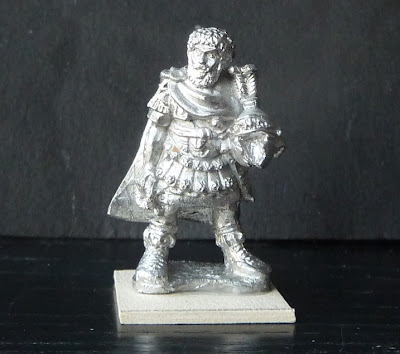 The set that includes Marcus Aurelius also includes his co-emperor and adoptive brother Lucius Verus.  Verus was a very different character from Marcus Aurelius.  He led the campaign against the Parthians shortly before the Marcomannic War but seemed to spend a lot of time partying with his "low born" mistress Panthea before marrying a teenage bride less than half his age.  He sounds much more my sort of chap.  More on him when he's painted.  The Aventine figure is quite a good likeness of him.

Posted by legatus hedlius at 09:30