I have finished the filling and sanding on the main hull and have now undercoated it.  It's such a big model it took a full can of Humbrol aerosol to cover it!  I put on some paint today as a test and I think it will look quite striking as I am going for a yellow and red colour scheme.

I have a few issues so far. I am not brilliant at using my hands so the filling of the (quite substantial) gaps between the bow and stern pieces and the main hull isn't brilliant.  I am running out of time, however, so I just needed to get on with it.  The main problem is the one of the shields mounted down the side of the guard rails.  I really wish Grand manner hadn't done this as it sets it in a particular period.  At this time (46 BC) the Romans were using the spined, curved top scutum as depicted in the excellent new Warlord Games plastics.  The flat oval ones were used by auxiliaries from a little later (before they were universally adopted a few hundred years later).  So, the shields are wrong for the period. 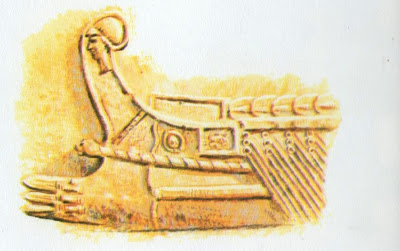 I don't have any reference books on Roman Warships (there isn't an Osprey, surprisingly, as there is for Greek warships) so I am restricted to Greece and Rome at War and Warfare in the Classical World. Neither of them, worryingly, give any information on rigging!  This illustration, from Greece and Rome at War, is based on a relief from Ostia, of about 30 BC and clearly shows spined shields overlapping along the guard rails. 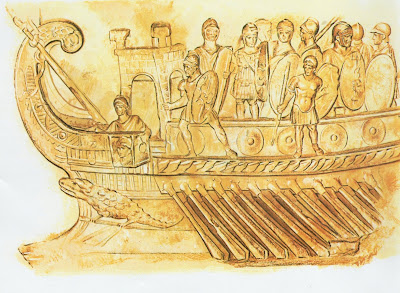 This illustration, from the same book, based on another relief from Praeneste, is from slightly later.  The shields on the railing seem to have been replaced by a solid bulwark (the Grand Manner ship uses the classic Roman X rail design) with, it is thought, decorative shields painted on.  Of course, the shields my not be present because the marines on board are carrying them. 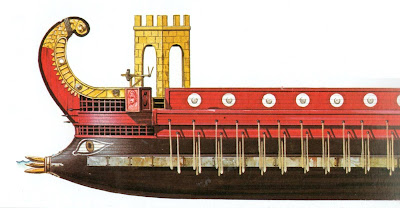 Interestingly, Warfare in the Classical World has a reconstruction clearly based on the classical original from this relief.  The interpretation of the ram here is exactly as Grand Manner have done it.  The placement of the castle is interesting as the illustrator has interpreted it as being with the sides at 45 degrees to the side of the ship's bulwark, rather than parallel.  Is this what the original shows, or is it an attempt to show perspective (which would be very unusual in ancient painting)?  Another decision to make! 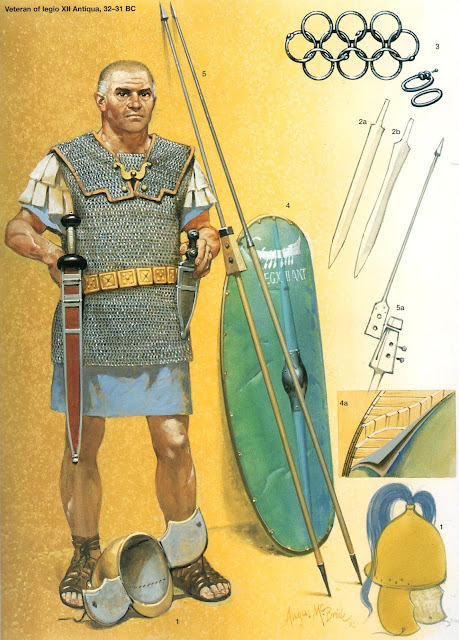 Ever since I bought the Osprey Roman Legionary 58 BC - AD 69 I had wanted to have a unit of marines in this striking blue colour.  I did order some Warlord Games flat auxiliary shields to match the ones cast on the galley but I have now decided to go for the authentic shields they come with and not worry about the difference in shape.

I went into Orc's Nest last week but they didn't have any of the Warlord Caesarian bolt throwers so I have just ordered a couple online.  Let's hope they actually arrive as the auxiliary shields never did and although the money was taken from PayPal I never received an order acknowledgement.

Anyway, more hull painting tonight as I puzzle as to what colour to paint the decks.  All the wooden decks on boats I have seen are a pale grey in colour but I don't really have the right colour.
Posted by legatus hedlius at 05:41

I don't think you need to worry too much about the shields. In the Osprey Roman Marine book, there is a chap without so much as a boss on his shield, never mind a spine! He seems to be based on a Palestrina relief, which is in the below link, and he's the chap I'm trying to emulate with my converted Thebans.

Marines in legionary gear would be fine, of course.

Yes the selection of helmets is very varied. Generally, I suspect, all sorts of helmets were worn during all periods.

Thanks for the comment it's keeping me at it! I'm going to do some more painting as its bright this evening. Just got some reduced red paint from ModelZone in Kingston's closing down sale...

Marines were often Egyptian or Greek, so seeing them with oval Thureos-type shields and Greek helmets and cuirass feels fine to me.

Just dawned on me; the spined shields on the relief are very likely Thureos, as Roman Marines are depicted with them.